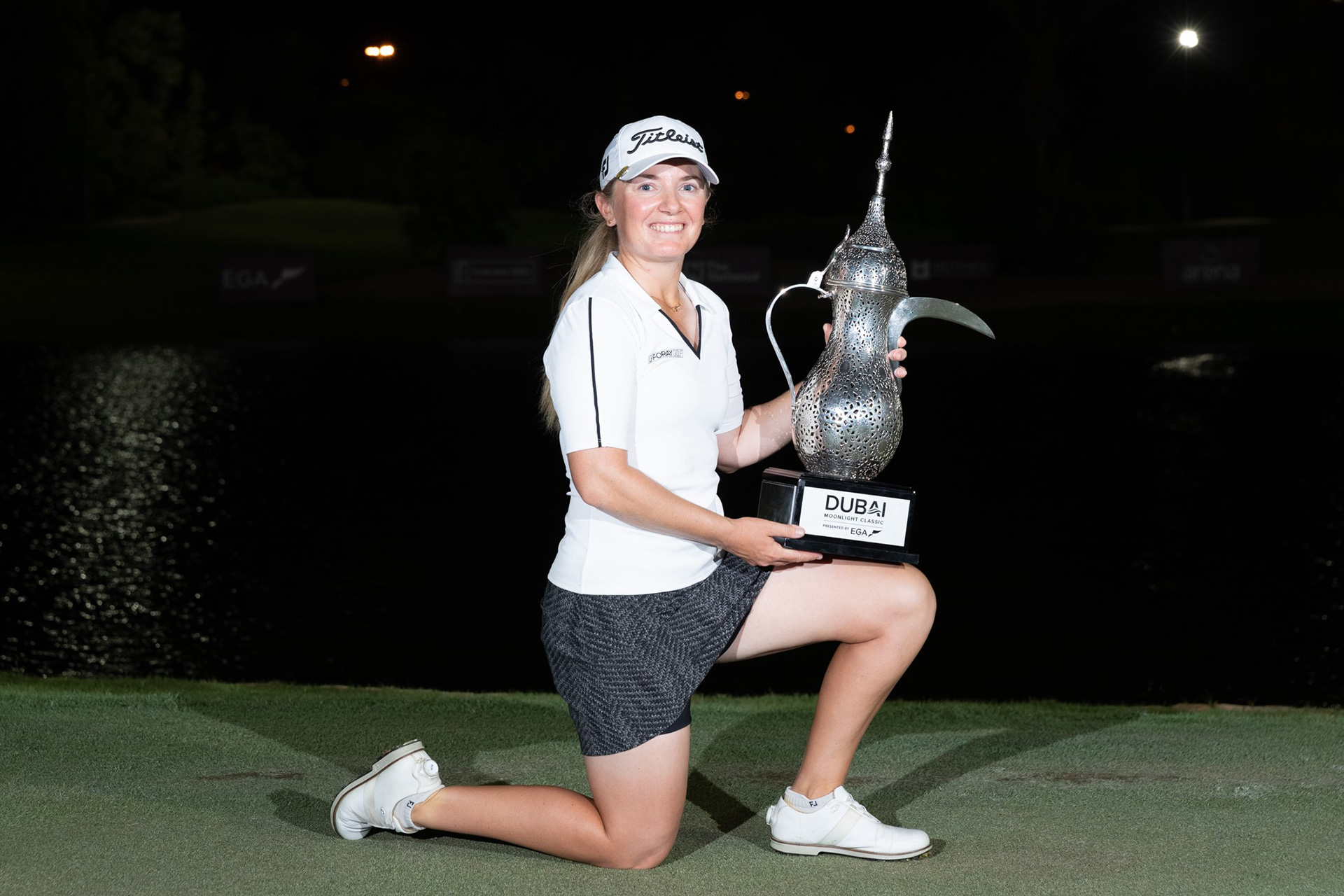 England’s Bronte Law holed a sensational eagle on the penultimate hole of the Dubai Moonlight Classic presented by EGA to seal an incredible one-shot victory over Mexico’s Maria Fassi on a night of high tension on the Faldo course at Emirates Golf Club.

Starting the final round on seven under par, three shots adrift of overnight leaders Fassi and Sweden’s Jessica Karlsson, Law carded six birdies and that thrilling eagle in a blemish-free eight-under par 64. In finishing the 54-hole tournament at 15-under par, Law’s maiden LET victory denied Fassi a wire-to-wire victory.

The 26-year-old was relieved to finally secure her maiden Ladies European Tour win and first tournament triumph since the Pure Silk Championship on the LPGA Tour in 2019. “It’s one of the hardest things. At times I didn’t know whether I could do it – this is my seventh week in a row playing, before I couldn’t even play three weeks in a row without struggling to get through with back problems or my body just hurting. To sustain that volume of golf, I’m so glad that my hard work is starting to pay off,” said Law.

“I have so many friends on the Ladies European Tour that I’ve grown up playing golf with, so to share that with them is something very special. It feels a lot closer to home than playing in the (United) States, it’s a really nice feeling and I don’t think it’s quite hit me yet. I don’t know what I’m feeling but I love Dubai and I love coming here. I really enjoyed my experience here last year and I just love coming here and playing something different.”

Having hardly put a foot wrong the entire tournament, Fassi followed up her course-record equalling 63 with a second round of 71, and after trading a bogey and birdie on the front nine, she stepped up a gear with four birdies on the back nine. That looked enough to see off her nearest challengers - Lee-Anne Pace of South Africa could only card a two-under 70 for an 11-under 205 and Sweden’s Jessica Karlsson returned a two-over 74 for an eight-under 208.

Fassi, playing her first ever tournament under floodlights, was philosophical in defeat. “I think I played good golf all week, it’s never nice to lose but it’s nicer to lose that way when you played really well. Shooting eight under, Bronte very much deserved to become champion. I am very happy with the way my game has been the last few weeks and I really enjoyed my first experience here in Dubai. I’m looking forward to coming back next year,” said the 23-year-old.

Elsewhere, Dubai-based Chiara Noja was positive despite a difficult day in which she carded a three-over 75 to finish her professional debut at four-over par. The 15-year-old, who turned pro on the eve of the tournament, said: “I am in a better place that I was previously. I do need to work on certain aspects of my game but I’m feeling positive. Turning professional was a little bit of added pressure, but I think I’ve dealt with it pretty well.”

Fouzeya Faridoon, Manager of Sports for Women at Dubai Sports Council, added: “The Dubai Moonlight Classic is considered one of the most important events across the Dubai sporting landscape, with a great field of players on the international stage. It also supports the thriving sports community within the emirate. We wish all the very best to the players and hope they’ve experienced the best out of Dubai.”